A small, clumping plant with tuberous roots, Monadenium ritchii grows to 30cm tall and 3 cm diameter with hot pink flowers in late summer before going dormant. Quite easy to grow, but keep quite dry during dormancy. I wish I had a better photo, but until better weather arrives this will have to do. 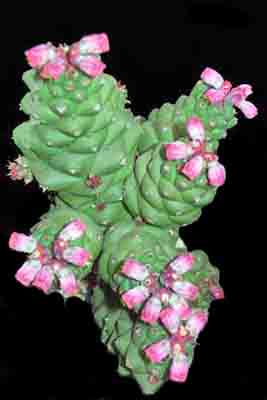 Wow! We must have been greeted with almost an inch of snow this morning! From the newscasts one would think we were approach a monumental winter catastrophe. We're such wimps here in Portland. The doctor's office even called to cancel my appointment because many of the workers couldn't make it in!!! I couldn't believe it. 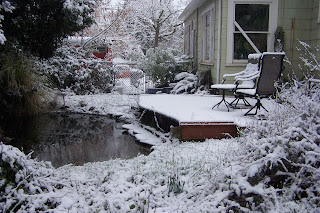 Oh well, it's enough for me. It makes it look pretty for an hour or two and then goes away. And the flowers can continue to push their colorful heads up through the newly defrosted ground. In spite of the snow, Spring is coming on fast!
Posted by Unknown at 12:34 AM 2 comments:

This is a highly variable species. This is a nice four-headed clump with white spines. It stays dry during the short winter days but will reward with gorgeous flowers when given adequate water in the Summer. 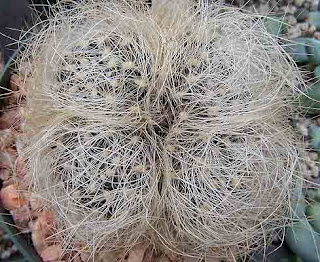 We're expected to get a late blast of winter cold for the next couple of days. I know our friends in Wisconsin will laugh, but we're even expecting 2 or 3 inches of snow tomorrow! But from the news stories it would appear that we're facing something more in the range of a real blizzard...
Posted by Unknown at 12:00 AM 4 comments:

This beautiful Kelly Griffin hybrid doesn't quite show off it's deep green and red markings during our winters in Oregon, but with the brighter light of Spring and Summer it'll be showing its colors. It stays relatively small, making it a great candidate for pot culture. 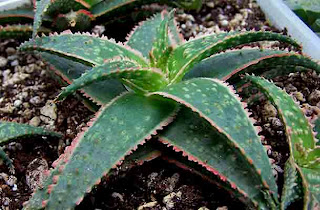 This is a form of the "Zebra Plant" (Haworthia fasciata) which is found north of Uitenhage in the Eastern Cape Province of the Republic of South Africa. It's larger and has broader leaves than the typical form. It probably doesn't deserve varietal status and should be seen as a localized form. 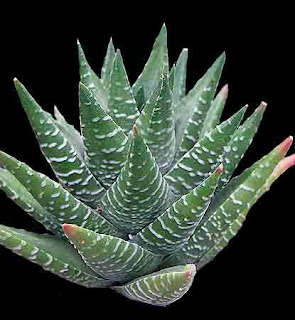 This is a seed grown plant of Haworthia cooperi var. venusta (GM292). I love its plump little fuzzy leaves. We don't have these up for sale yet but probably will later this Spring. 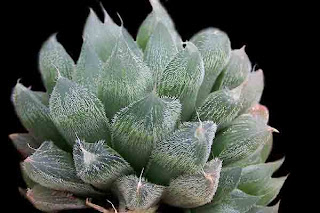 Thanks for visiting.
Posted by Unknown at 12:15 AM 2 comments:

I've updated the information about upcoming events of the Oregon Cactus & Succulent Society at the OCSS link on our nursery web pages. If you're in the Portland, Oregon area, check it out!
Posted by Unknown at 2:01 PM No comments:

One of our favorites is this Dick Wright hybrid, Echeveria 'Lola'. The form is quite sculptural and consistent from plant to plant, with really outstanding flowers. Any time of the year these are impressive plants. 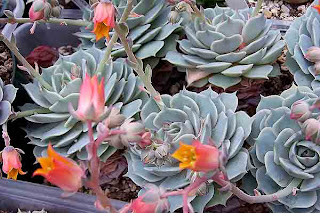 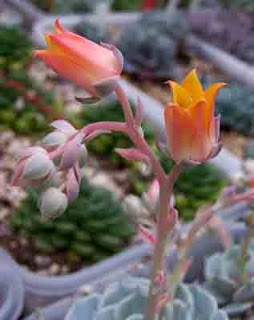 Not an especially unusual Echeveria, it being used extensively for landscaping in Mexico, Echeveria elegans is still an outstanding plant, well worth being grown as a potted specimen in areas where it can't be grown outside. And the flowers....! 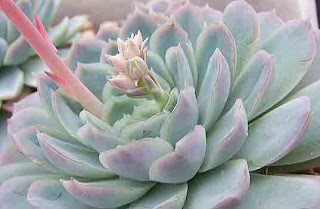 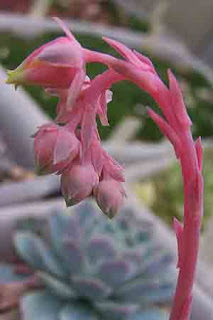 Culture is easy, but care should be taken to not rub off the white surface of the leaves when handling.
Posted by Unknown at 12:03 AM 2 comments:

There's been some considerable discussion about the lineage of this plant. It goes something like: "What is this plant?" Described by Berger in 1904 as E. pulchella, we'll go with Myron Kimnach that it's probably a hybrid with one parent as Echeveria amoena or Cremnophila linguafolia. Whatever its pedigree, its a nice little plant. 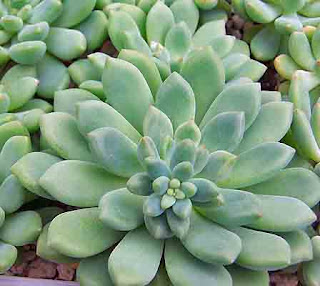 We welcomed two new members to the Oregon Cactus & Succulent Society this evening and had a very nice program.
Posted by Unknown at 11:58 PM 2 comments:

Just an announcement for those in the Portland area: The monthly meeting of the OCSS is tomorrow night (February 17) at 7:00 pm at the Sacred Heart Villa, 3911 SE Milwaukee. See you there.
Posted by Unknown at 7:14 PM 3 comments:

These are both the same plants but the top one is now, showing its full winter color. The second photo was taken during the summer. We received it simply as Echeveria agavoides hybrid, but around the greenhouse we call it "Apple Green"...except during the winter, just when we need the color. 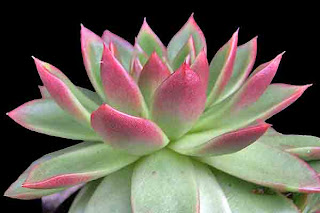 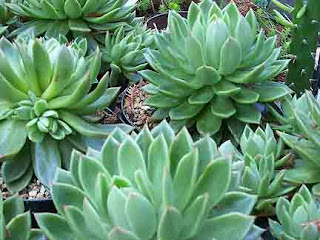 This is an old cultivar of Haworthia retusa called 'Aker's Black'. It's a nice robust, dark-bodied plant that grows quite large. Very impressive. 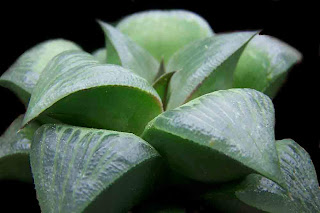 Another work by Lynn-Marie. This time it's Escobaria flowers. I assure you that flowers aren't the only things she portrays. She also portrays dogs and horses and is currently working on a portrayal of "She Who Watches", the famous petroglyph of the Columbia River gorge. She has also provided illustrations for academic works about the art of the Scythians. 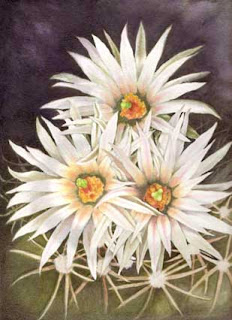 When I was out in the greenhouses watering plants, this caught my eye. It was Echeveria 'Frosty'...on the other side of the wide center table of course. So...leaning precariously across the other plants I was able to capture it in just the right light. And it wasn't even frosty out! 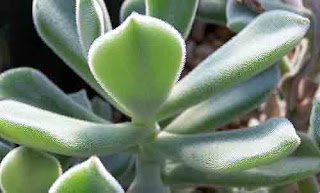 Enjoy your plants.
Posted by Unknown at 12:30 AM No comments:

I've had this one up before, but the light was just right for a good photo of it the other day: Echeveria shaviana 'Pinky'. The coloration is extremely nice and the afternoon sun brought it all out to advantage. It's a cultivar from Martin Kimnach. 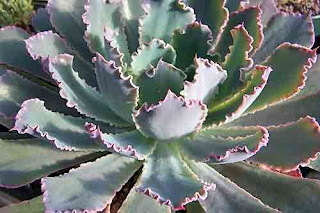 I was out watering plants in the greenhouses today and flowers are beginning to set up on quite a few of the plants. They know Spring is coming!
Posted by Unknown at 12:21 AM No comments:

Another wonderfully weird plant is this one from Madagascar. It develops a small caudex and creates a hanging basket conversation starter. Nice, fuzzy stems!

We don't live in what could be called "Agave Country". We live between a temperate rain forest and a high desert and, though some Agaves will do well outside - even here - most Agave plants are best grown in pots. That said, we've always loved them, and this cultivar is a beaut! A cross of A. ocahui and A. attenuata, Agave 'Blue Glow' is one very striking plant. A much smaller (2-3 feet across), solitary, stiff leaved plant than the similarly named Agave 'Blue Flame'. 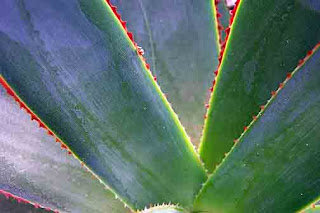 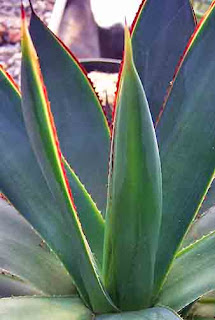 We don't know the name of this plant. We have it; we like it; we grow it. What more can I say? If one of you knows its correct name, please...venture an opinion... 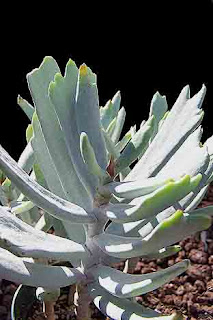 Enjoy your plants!
Posted by Unknown at 11:49 PM No comments:

According to Anderson et. al., this is the same plant as the previous post, just a representative of its variability. OK. I know they have their reasons, but I'm not convinced. I think I have a philosophical difference with them about the nature of the naming process. But that's another discussion. In the meantime I'll stick with the Sulcorebutia name and list the synonyms (including Rebutia canigueralii). 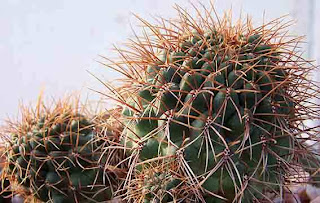 Enjoy your plants (even when you're not sure what name it should have)!
Posted by Unknown at 11:31 PM No comments:

I finally did get out and take some new pictures. They'll have more color in the summer, and of course there will be flowers! But without either, they're still rather impressive little plants.
This complex of plants can be very confusing, showing a large diversity of forms over a wide geographic area. As a result, there has been a large number of names given to what some now consider to be one species. However, I'm sticking with the more helpful and descriptive names. Tomorrow, Sulcorebutia pulchra (Syn: Rebutia canigueralii). 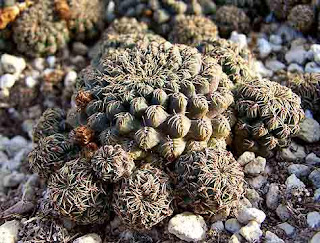 Enjoy your plants!
Posted by Unknown at 12:26 AM No comments:

I wasn't aware of this day set aside to support efforts to save bears around the world, some of which are very endangered. One of the persons who follows this blog is deeply involved in efforts to save the sun bears of Borneo. "We are just asking for small donations to be made on this day to different organizations that help bears", such as groups like the Bornean Sun Bear Centre, Animals Asia, WSPA, Polar Bears International, Panda Bears International, World Wildlife funds, Wild Aid and the North American Bear Center. 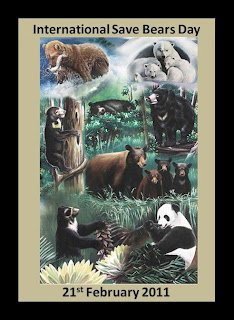 Posted by Unknown at 3:23 PM No comments:

For those of you who are growing just Lithops, winter can be a rather boring time. But now...the mouths are beginning to open and the new leaves begin to emerge. Slowly building excitement. (Some of my friends would say it's about as exciting as watching grass grow, but I strongly disagree.) This may be slow, but it's not boring. This is a group of Lithops hookeri var. dabneri ex. C13. 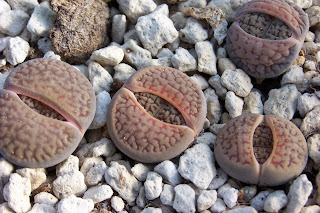 We're beginning to get a little early Spring, while the Central and Eastern parts of the U.S. are suffering under a severe winter storm. In fact, it's been colder in Tucson than it is here for the last few days...but that will change soon enough. Saw our first daffodil flower yesterday!!! Yes!
Posted by Unknown at 5:47 PM 2 comments:

Another nice crest which is overgrowing its area is Pygmaecereus densilanata crest. My guess is that this is a species which has been clumped with something else, if it was ever commonly accepted, but in this case it doesn't really matter. Once these plants become crested it's almost impossible to discern what the original plant was, accept for the occasional normal offset. But, just out of curiosity, does anyone know anything about this species? Was it legitimately published and if so, by whom? And where would it be included in the currently more accepted taxonomy? It's not even mentioned in Anderson. Feedback? 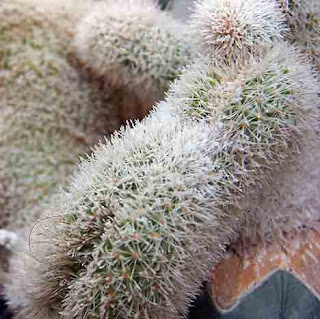 It's been a while since I've posted any of our crests. This is one of my favorites: Turbinicarpus valdezianus crest. It's on a graft and is getting quite large. 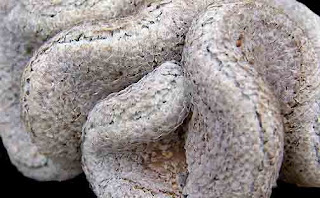 Enjoy your plants!
Posted by Unknown at 12:55 PM No comments: