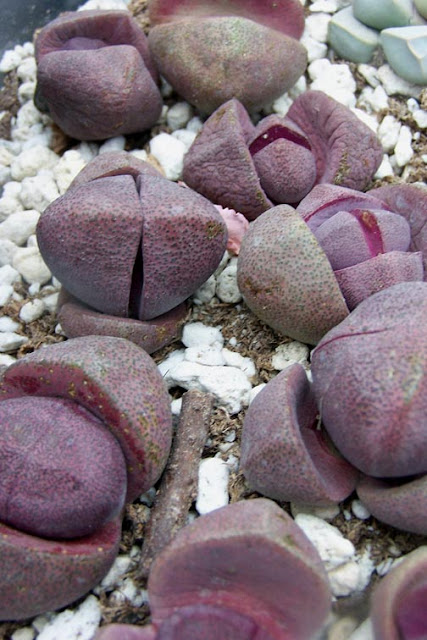 Desperately in need of water, "Royal Flush' is, never the less, holding on. It is a succulent after all! I expect to be able to get out to do some extensive watering tomorrow, now that the weather has moderated. Especially the epies, echeverias and haworthias.
Posted by Unknown at 11:49 PM No comments: 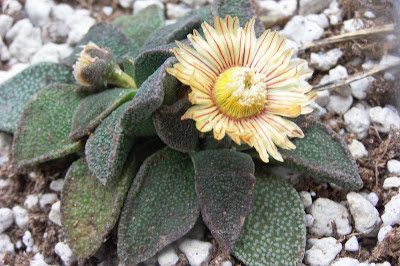 Another Aloinopsis is also blooming: Aloinopsis rubrolineata. Another "pick me up" for another gray, overcast, drizzly day.
Posted by Unknown at 11:11 AM 1 comment: 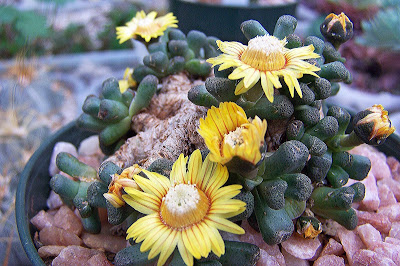 It's always nice to go out to the greenhouses in the winter and be greeted by these nice bright and cheerful flowers.
Posted by Unknown at 11:49 PM No comments:

An Ensemble of Echeveria 'Lola' 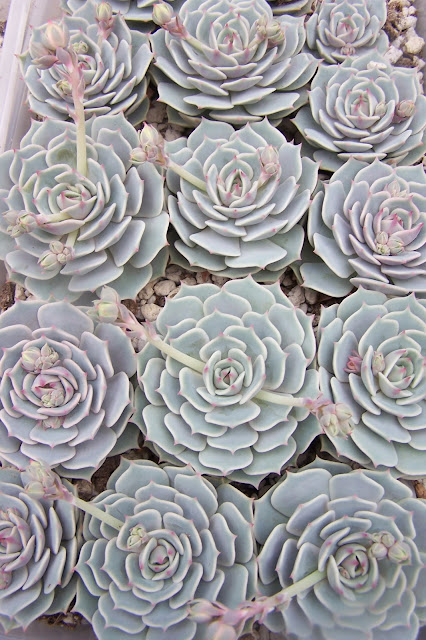 One of my favorites, this Dick Wright hybrid doesn't readily offset, so most propagation is from leaves. A bit slow, but worth the wait.
Posted by Unknown at 11:38 PM No comments: 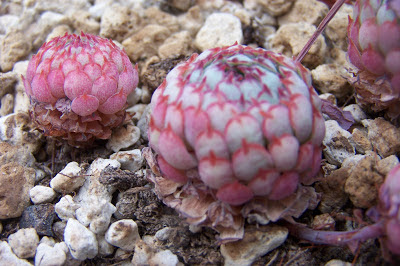 At this time of year the coloration on these small growing echeverias is absolutely fantastic.
Posted by Unknown at 11:34 PM 1 comment: 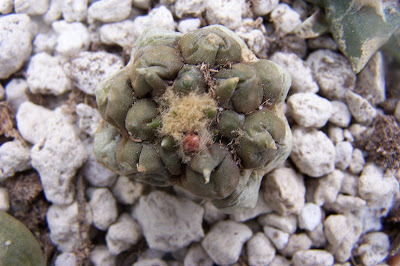 I finally had a chance to look around the plants yesterday and - lo and behold - there's a bud showing itself in several of the cintias. It was a good thing I noticed because these flowers have tendency to pop up very quickly. Last year  I missed most of them. A native of the high Andes in Bolivia, these plants can be a challenge in cultivation.
Posted by Unknown at 7:42 PM No comments: 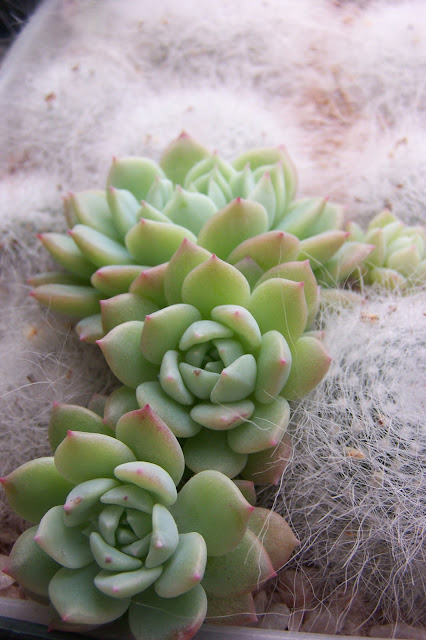 Sometimes when you have a cutting which needs a place to be rooted, any open spot in a pot near you is the prime candidate. But of course, the plants grow...which sometimes makes for strange bedfellows. In this case, it's echeverias and Mammillaria hahniana.
Posted by Unknown at 11:48 PM 3 comments: 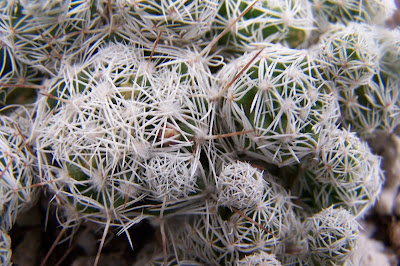 When we first started growing this plant, back in the late 1960s, we just knew it as the thimble cactus, and then as Mammillaria fragilis, which then became M. gracilis var. fragilis. Then the "fragilis" was dropped and it became the name listed above, only without the fragilis part. We just leave it on for old time sake...and because it then makes this wonderfully long and impressive botanical name for what is basically a simple little plant. It's easy to grow and if you look at it sideways you'll have ten new plants as each segment breaks off readily.
But just because it's easy doesn't mean it isn't worth having. And look closely. Here it is January and it's supposed to get down to 24F tonight, but right there in the center left of the plant is a new bud beginning to push its way through the spines. (Of course, the plant's in the greenhouse, not outside freezing it's spines off. We're not that cruel!)
Posted by Unknown at 11:49 PM 5 comments: 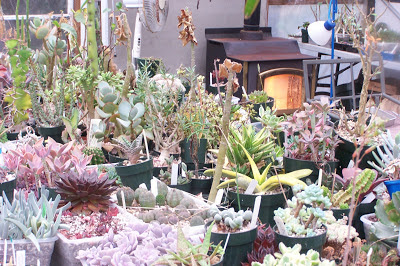 Well, actually, I'm ready for Spring. But it's not to be...at least not yet. But cold though it may be, it's fairly cozy in the greenhouse. Now, if we can just get over these awful colds and bronchitis, we can take a break near the fire with a nice latte. All we have to do is find a place for our feet in the crowded aisles! :)  Do enjoy your plants!
Posted by Unknown at 12:15 AM No comments: 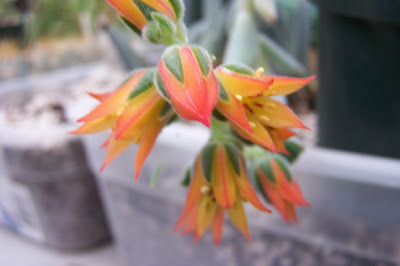 There aren't a lot of things flowering here right now, but - thanks to the echeverias - we do have some. In this case, it's the flowers of one of the two echeveria cultivars which goes by the moniker 'Frosty'.
Posted by Unknown at 11:49 PM No comments: 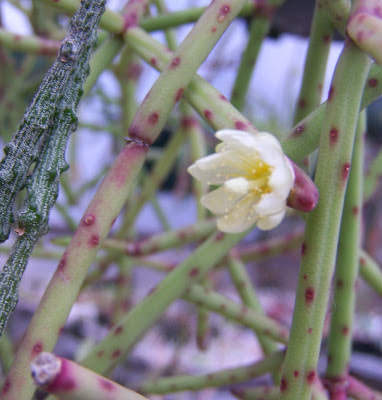 We've had this old Rhipsalis neves-armondii for longer than either of us can remember. It came through the fire in 1003 and continues to produce these neat little flowers at times when not much else is happening. This rhipsalis is from Brazil (Paraná, Rio de Janeiro, Santa Catarina, São Paulo), and like most epiphytes (and geophytes), it likes a moist substrate that also provides good drainage. Give less water in the Winter and keep free of frost.
Posted by Unknown at 12:15 AM No comments: 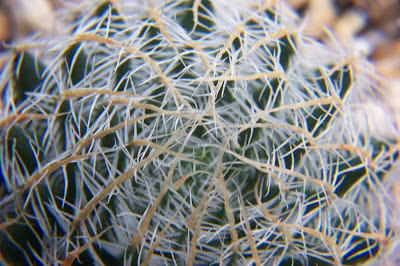 This is a picture from our archives. I just haven't had time to get out and do some photography. This plant was grown from collected seed but the location data was lost. Outstanding plants.

I hope you all had wonderful Christmas and New Year's celebrations. We were blessed by the presence of our granddaughter (13 years old) for a little over a week. Now that she's returned to California we're struggling with colds and bronchitis, but hopefully we'll get over this soon enough. Our weather finally turned cold for the new year, finally getting some below freezing temeratures for a few nights.

I'll try to be much more regular in my posting in the weeks and months ahead.
Posted by Unknown at 11:43 PM 2 comments: