An article in The Times of India describes a current exhibit of succulent plants, but do we really have to use the stereotypical common names that sometimes seem irresistible to some people. The "Golden Barrel" (Echinocactus grusonii) is described as "Chinocactus ...'Mother-in-law's Chair'"!

It also appears that they really grow them "hard" in India: "Typically, a desert plant can survive more than 40 years without water."

Posted by Unknown at 1:25 PM No comments:

We're just ending the worst cold snap we've had in a couple of years - 19 or 20F at night - but the signs of Spring are all around us. Bulbs are emerging: Snowdrops, daffodils, Iris -- some will be flowering (snowdrops, daffies) within a week or two. At the same time, the Banana Trees have been hit pretty hard, but they'll come back later this spring, and one of the Aloes we were experimenting with bit the dust.

I don't know about you, but I'm ready for Spring! Heating is just too expensive this year.

Now I know our cold is peanuts compared to some of you. Please, share your experience with growing succulents in cold weather areas. We'd love to hear from you.
Posted by Unknown at 4:24 PM No comments:

A good reminder from the blog Stapenhorstbunne:

Remember plants accumulate dust as much as any other surface in your home. Clean plant leaves, especially succulent plants, with a damp cloth and cold water.

Have you ever done this? The other day I was at the dentist's office when I noticed the Sansevierias near the elevators. They were filthy. Reaching for the tissue in my pocket, and checking to make sure no-one was watching, I proceeded to clean every one of those leaves.

Oh...and by succulents, I don't think they mean to include most cacti!
Posted by Unknown at 3:29 PM 2 comments:

Just what we need; another succulent plant being commercialized for diet use.

Apatrim, according to the story, is a "newly released diet pill" which contains an extract of Caralluma Fimbriata, a cactus-like plant widely grown in India where it is eaten as a vegetable and used as an ingredient in curries and chutneys.

What we can confirm is that Caralluma Fimbriata, like the South African "succulent" plant Hoodia Gordonii, has indeed been chewed for many years by Indian tribesmen during long hunts to suppress appetite and enhance endurance.

But from there, the breathless weight-loss claims for Apatrim not only become more suspect, but seem likely to ultimately involve its distributor, PatentHEALTH, LLC , with the judicial system.

And the battle of the diet scammers goes on. Referred to on one online site as "Indian Cactus," it may have appetite suppression properties, but demand for such can lead to so many negative effects. I guess one good side effect is that it might take away some of the demand for Hoodia.

I also noticed while browsing that on at least one "New Breakthrough in Dieting" website, a very nice photo by Gerald Barad on the Cactus-Mall, is used - probably without permission - and another photo identified as C. fimbriata is actualy Hoodia gordonii. O well, who really cares hey?

Posted by Unknown at 2:24 PM No comments:

From the Seattle Times Home and Garden Section comes this observation about bringing a lush, "weird", succulent look to Northwest Gardens:

Hardy agaves and yuccas add spikiness and structure. There are even cactus that live through our winters if you provide good drainage, including the cartoon-shaped prickly pear (Opuntia cycloides).

I always like to see garden sections pointing out some of the succulent options for our area, but why be so limiting. There's so much more that's possible than yuccas and agaves and "prickly pear." And what's O. cycloides? I guess it's a variety of O. engelmannii. Though that name doesn't appear in Anderson's The Cactus Family, it does appear in a few limited on-line sites, but primarily as a variety. There are whole bunches of Opuntias which are hardy here. In our own neighborhood, I know of at least 8 different opuntias growing at people's homes (though I have no clue if any of them are O. cycloides).
Posted by Unknown at 11:33 PM No comments:

The Anchorage Daily News has a question and answer column today (where it's currently 12 F) with a Master Gardner, Fran Flint, who loves succulent plants. When asked how she got started in cacti, she said,

I am a lazy gardener, and cacti are really easy and really pretty cool, not to mention the fact that there are a lot of weird guys out there (meaning cactus, of course) with really great shapes and they are just an all-around fun sort of a plant. I am a really bad waterer and most of my plants must live in drought conditions, so cacti fit the bill. Besides, I really do love the textures and feel of them too.

Lithops at Matthaei conservatory in Detroit

They've renovated the conservatory in Detroit and the Detroit Free Press highlights the Lithops collection. Calling them "Rock Stars" (I like that.), they comment that

Lithops come in various sizes, markings and colors, like mottled pink, brown and gray. Flat-topped and stout, they look like cute fireplugs or, possibly, distant relatives of SpongeBob SquarePants. 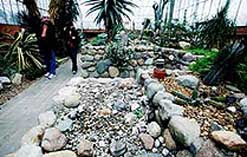 I'd never thought of them in that light, but I'll have to ask my granddaughter if she sees the resemblance. She's the expert on SpongeBob in our family. the article continues:

Lou Kilbert of West Bloomfield, president of the Michigan Cacti and Succulent Society, has raised many lithops in a greenhouse, but says the plants are difficult for the average home gardener to keep alive.

In the Wheeler County, Oregon web site, in their section of scenic drives, we read the following:

Another leg stretching excuse is to carefully prowl the slopes in search of the red blooms and sharp spines of hedgehog and prickly pear cactus. I meant it when I said carefully. Once I had been inclined to photograph the roadside flower bonanza when I experienced my first Oregon cactus; its piercing needles bayoneted my foot, right through my shoe!

Hmmm. Hedgehog cactus? In Oregon? Pediocacti, Opuntias, maybe Coryphanthas...but Echinocereus? Hey, any of you more experienced Oregon cactus explorers, help me out here! Though they could grow there, I don't know of any Echinocereus stands in the state. But, hey...

Posted by Unknown at 8:39 AM No comments: 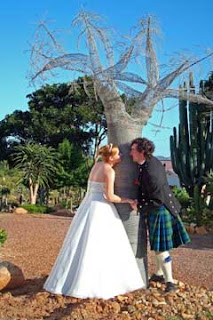 Apparently this couple from Scotland is crazy enough about cacti & succulents to travel to South Africa and get married in Soekeshof Gardens, the largest collection of Succulent plants in South Africa. It contains the oldest cactus in S.A. (1910). (They appear to be standing next to a metal plant sculpture.) Find out more at Soekeshof Gardens. 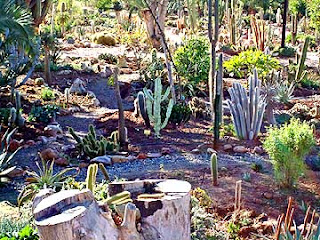 Posted by Unknown at 5:48 PM No comments:

This from the "Crazy Plant Lady":

Every family has one and I happen to be yours. I have a small obsession with succulent plants. I research them, buy them, grow them, cultivate them and make them grow on anything and everything they will cling to.

And so she has created a unique form of wedding decor for her upcoming wedding: a succulent wreath. 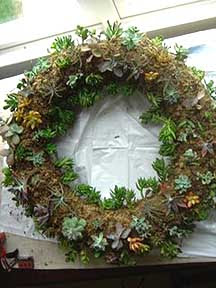 I Guess Some of us are "Avant-gardists"?

From Luebeck, Germany comes the following comments about using plants for interior decoration:

Guenther Sator, a feng-shui expert based in Mattsee in Austria adds that avant-gardists love succulent plants because they grow in unusual shapes and are easy to care for.

'Thanks to their slow growth, you can retain their structural elements for a long time,' he adds. Smaller plants can be arranged in a glass bowl or ceramic block filled with sand, rocks and gnarled roots to create a miniature desert garden.

Cacti are another good idea. 'You create attractive views, scenery and niches by potting them in large earth toned, sand-filled pots,' says John Langley, a professional florist from Hamburg.

Posted by Unknown at 7:05 PM No comments:

A recent article in the Akron, Ohio Beacon Journal extols the beauty of succulent plants:

"Tired of blossoms in your flower garden that dazzle and sizzle but are quick to fade? Maybe it's time for some dependable succulents — the enduring plants that last through the good times but also, especially, the bad."

There's a growing appreciation among gardeners of plants ''for their shape and their form and their geometry and the elegance that comes with that, as opposed to the 'I just want to grow annuals' or 'Give me my petunias or roses,' '' said Debra Lee Baldwin of Escondido, Calif., author of Designing With Succulents (Timber Press, 2007).

Posted by Unknown at 2:41 PM No comments: