Talk about a flower appearing out of nowhere! We didn't notice any indication that a flower was about to bloom, and then we walked down the aisle and there it was. This is Cintia knizei, a fairly rare, miniature plant in collections. It's considered quite difficult on its own roots and is therefore often grafted. In habitat (Bolivian Andes at 2800-4000 meters) it remains solitary, but when grafted it becomes a bit columnar and clumps. It is very sensitive to over watering and should be grown in an extremely porous, gritty potting mix and should remain cool and dry during the winter months. Corkiness at the base of the plant is normal as the plant matures. 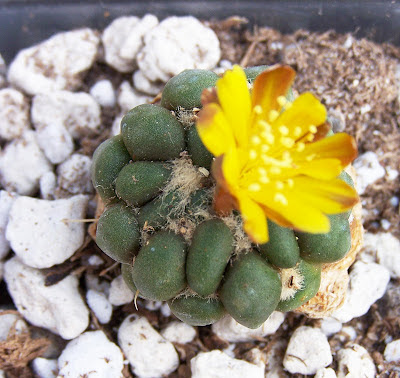 This is a plant for those who like a challenge...or, who wants to try their hand at grafting. It has also been published as a Rebutia, which doesn't make any sense to me, and its flower shows a relationship to Copiapoa, where it has also been proposed to be placed. But to me, it's unique enough to remain as a monotypic genus.

Some of us have been around long enough to remember buying seed from Karl Knizi who discovered this plant and in honor of whom it is named. The genus gains its name from the location where it was first found, at Cinti, near Otavi, Potosa department in Bolivia.
Posted by Unknown at 12:09 AM